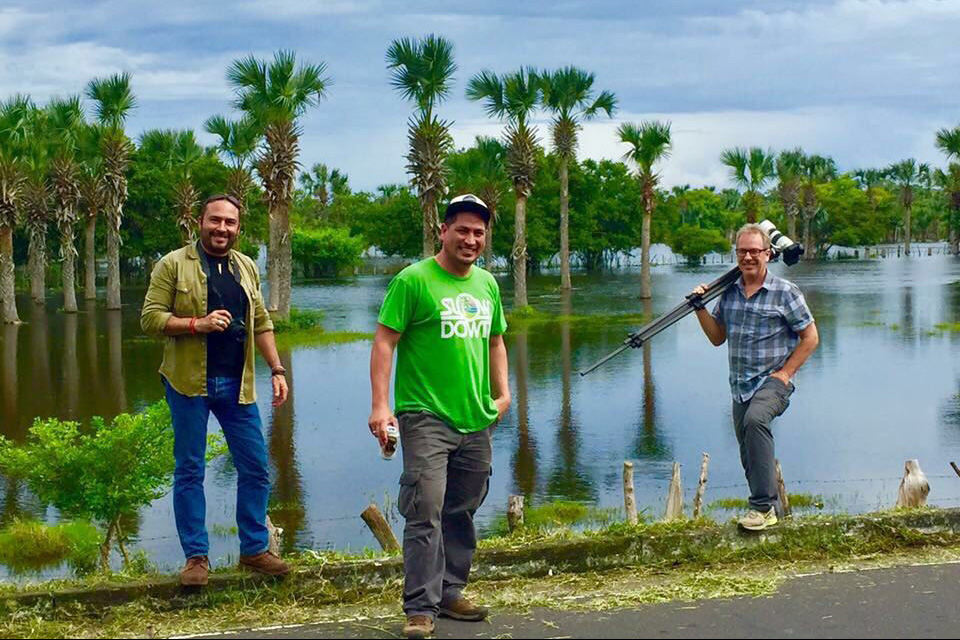 Guatemala: On the Edge of Discovery began innocently enough, with a phone call from Elsie YiDonoy.  She’s the owner of Bella Guatemala Travel, a company that specializes in cultural travel to Guatemala. Elsie invited me to work with her Jose Antonio Gonzales and Emilio Fallaice, her main guides to build a library of images to promote their tour offerings.  I’d never been to the land of the Maya, so I went – four times over the course of the next year.

I hate to admit it now, but I didn’t know much about Maya culture in the beginning. The ancient ruins were meaningless piles of rocks to me. Some were simply bigger than others. But little by little, I was caught up in Jose and Emilio’s infectious enthusiasm for their country.  To my own surprise, I even began to educate myself, building a library of books about the ancient Maya and contemporary Guatemalan culture.

Then, the phone rang again. The call came from Lewis Williams, a man who books filmmakers into independent venues. He asked if I had a documentary film that I could take on the road.

Soon, he began booking dates and I got busy – fast. With a list of confirmed venues in hand, I approached Elsie about funding the hard costs of hard travel in Guatemala. Her support, along with a few withdrawals from my bank account, were the extent of our financing.

With no room for mistakes, I set out with Jose and Emilio to create a film that was accurate, authentic and heartfelt. And we were determined to punch above our weight, to tell the story with skills and production values that were far beyond our budget.

Less than a year later I began presenting Guatemala: On the Edge of Discovery, to a live audiences.

The most ridiculous challenge was figuring out how to compress 4,000 years of human history into an 80-minute film that was worth watching. After months of intense research, the index cards stopped moving around on the table, revealing a story line that flowed and a level of detail that finally made sense.

Then the work of writing the scripting, executing the shot list and chasing interviews began.   Time was short and the “todo” list was long. But we kept chipping away, traveling to the four corners of the country, collecting one B-Roll clip at a time.

We got our first big “get” when Dr. Richard Hansen, the Director of the Mirador Basin Project, agreed to sit for an on-camera interview.   Dr. Hansen, the lead scientist on one of the largest sites in Guatemala for more than 30 years, is well-known in the Mayanist world for his discoveries and his theories about the Pre-Classic Maya civilization that built, and then abandoned, El Mirador.

The interview was a game changer. We knew that if we caught a few breaks and worked hard enough, we were going to make a good, solid film. Even though we were just three cucarachas en trapos, Jose and Emilio began pulling every thread they could find.

One by one, people agreed to get mic’d up for the camera. Olga Riech provided incredible insight into Guatemalan textiles. She described the devastating effects that the 1976 earthquake and the long civil war had on the Maya women and their weaving tradition.

Daniel Dreux, an elusive, larger than life, figure described how he discovered the Candeleria cave system in 1974. (It’s only the largest cave system in Central America). The caverns, which are full of Maya artifacts, were declared a National Park a long time ago. Even so, Dreux has been fighting a losing battle with hungry squatters who are planting forbidden fields in the heart of the park.

Sophia Parades graciously opened the doors to the Ruta Maya Foundation’s priceless collection of artifacts. The B-roll and insight we got that day was beyond priceless.

Contemporary artists, Irene Carlos and Arturo Monroy, lent us their time and their work. Their presence lent a beautiful texture and a thoughtful window into Guatemala’s past and future.

David Sedat, the retired Field Director of the Early Copan Acropolis Project, led the team that discovered the tomb of Yax Kuk Mo.  He was the legendary founder of the Copan Dynasty that ruled during the Classic Period. David described for us what the discovery meant to the advancement of ancient Maya studies.

Licensing archival images was a challenge until Jose and Emilio introduced me to Anais Garcia, the director of the photo library at the Centro de Investigaciones Regionales de Mesoamerica.  I spent a delightful, rainy day in their office, pouring through an impressive digital archive, selecting images that were crucial to our narrative.

Livy Gracious, a brilliant and passionate archaeologist and professor at San Carlos University explained the progression from the earliest civilizations in Meso-america to the Maya Pre-Classic Period. Now, like then, she believes that migration facilitates the exchange of ideas between cultures.

A Maya day-keeper named To-hil performed a shamanist ceremony to divine the future for us. Then he sat for the camera and deciphered a few aspects of Maya spirituality, sharing his view of the relationship between Christianity and the ancient beliefs.

The final piece of the puzzle fell into place when we met Gustavo, the last of his kind in a village of that was once full of carpet weavers. He and his wife are two of the kindest souls I’ve ever met. Their surprisingly tender story provided a beautiful, natural ending to the film.

Our time with Gustavo marked the transition from field work to the edit bay.  Many long days and nights later, Guatemala: On the Edge of Discovery was born.